It’s two months after the end of Crashed, and Lia is right back where she started: home, pretending to be the perfect daughter. But nothing’s the way it used to be. Lia has become the public face of the mechs and BioMax’s poster girl for the up-and-coming technology, devoting her life to convincing the world that she—and the others like her—deserve to exist.

But then Jude resurfaces, bringing scandalous information that suggests BioMax is using the technology for a great evil. And when Lia learns a shocking truth about the accident that resulted in her download, she is forced to make a decision she can never reverse.

Review –
Let’s just say that I loved the book until the ending.   Whoa, I was completely taken off-guard and not in a good way.  I think the ending was an easy way out for the author, it was abrupt and wham bam thank you mama it was over. I enjoyed the series but wish Lia would have caught  a break. All she wanted was to LIVE. 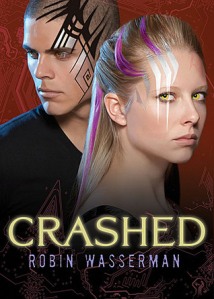 Grade 7–10—Crashed can stand alone, but teens who have read Skinned (S & S, 2008) will find themselves more invested in Lia’s newest conundrum. She is a mech, a skinner. Her mind has been downloaded and her memories placed in a mechanical body. It is the only way she could survive after an accident demolished her body. She has left her family to live with other mechs because they understand what she is going through. Now a new threat has arisen: The Brotherhood of Man. This organization considers mechs to be against the will of God, and they have no problem killing innocent people in their quest to prevent any more from being “born.” However, there is more to the Brotherhood than appears on the surface, and as Lia and her mech friends dig deeper, they find a conspiracy with far-reaching implications. This installment in the trilogy has intense action, a fast-paced plot, and interesting characters, even if they can’t “feel.” Give it to fans of Mary E. Pearson’s The Adoration of Jenna Fox (Holt, 2008) or Nancy Farmer’s The House of the Scorpion (S & S, 2002).—Emily Garrett Cassady, North Garland High School, Garland, TX
Copyright © Reed Business Information, a division of Reed Elsevier Inc. All rights reserved. –This text refers to the Hardcover edition
Review-
Though this book was a bit slow at the beginning it had me hooked just like the first one.  It was grittier, dark,dangerous and violent at times but completely made sense after the ending of the first in the series.  This is a great dystopian story and I can’t wait to read the next one.

Grade 9 Up—In a high-tech future, Lia Kahn is a rich, glamorous, “it” girl at a prestigious high school. Then a car accident leaves her body mangled beyond repair. Rather than let her die, her parents take advantage of a new procedure that downloads the contents of her brain into a sophisticated mechanical replica of a human body. Lia is now a “mech,” known in derogatory slang as a “skinner.” She still feels like Lia, but she no longer breathes, eats, sleeps, or ages. She can no longer enjoy the easy high of a b-mod, the ubiquitous mood-altering drug that gets the rest of her friends through lunch, and her boyfriend only touches her when he’s drunk. She is kicked off her beloved cross-country team because the coach believes her new body gives her an unfair advantage over her competitors. Religious extremists hold a protest when she returns home from the download operation, holding up signs that say “God made man. Who made YOU?” Lia can only see her new body and new social status as a tragedy. Thoughtful readers, however, will recognize that the true tragedy is her self-imposed isolation, and that the world is much bigger and more brutal than the halls of one wealthy high school. The book is written in snappy, short paragraphs with enough sarcasm, humor, and plot momentum to engage reluctant readers.—Megan Honig, New York Public Library
Copyright © Reed Business Information, a division of Reed Elsevier Inc. All rights reserved.

Review –
So what if this book is similar to The Adoration of Jenna Fox, I loved it on its own merit and am now listening to the second in the series, Crashed.
I felt bad for Lia Kahn because she didn’t ask to have her brain downloaded into a mechanical body which didn’t even look like her. It was her parents idea because her human body had been damaged beyond repair and they wanted to keep their daughter “alive” but afterwards had second thoughts, although it was never spoken of out loud.  Her best friends, boyfriend(who hooked up with her younger sister while she was dying),her sister and everyone that matters to her turned against her so she had nowhere to turn except to the world of the “mechs”.
This is a great series and I’m anxious to see how the next one turns out.