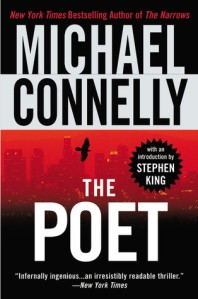 Denver crime-beat reporter Jack McEvoy specializes in violent death. So when his homicide detective brother kills himself, McEvoy copes in the only way he knows how–he decides to write the story. But his research leads him to suspect a serial killer is at work–a devious murderer who’s killing cops and leaving a trail of poetic clues. It’s the news story of a lifetime, if he can get the story without losing his life.

I’ve wanted to read/listen to this book for a long time but for some reason I always ended up reading/listening to something else. Finally, one day I found the audio version on sale so I grabbed it up and slipped it in the car cd player on the way home and almost didn’t want to get out of the car when I got home.  It’s a great story about murders, a manhunt, the intertwining of characters and twists and turns you won’t believe.   I loved it!!!!!!

Like Loading...
Edgar Allen Poe or (Edgar Allan Poe) was an American writer, poet, editor and literary critic, considered part of the American Romantic Movement. Best known for his tales of mystery and the macabre.

Anytime is perfect for Poe.  I read this during the month of October getting in the mood for Halloween and I think I’ll make it a yearly ritual.  No one does it better than Poe.

The specter of Edgar Allan Poe hovers, chillingly, over bestseller Fairstein’s seventh thriller featuring Manhattan sex crimes prosecutor Alexandra Cooper. Alex’s labyrinthine path to a serial killer travels through a lot of forensic evidence and two initially unconnected cases: the Silk Stocking rapist is terrorizing women after a few years’ respite and a woman’s skeleton is discovered in the wall of an East Village building. Said discovery takes on additional dimension when it’s learned that the victim was walled up alive and that the house was once inhabited by Poe. Freelance writer Emily Upshaw appears, at first glance, to be the Silk Stocking rapist’s latest victim, but several details feel off to Alex and NYPD detective sidekicks Mike Chapman and Mercer Wallace. Emily, it’s determined, is the victim of a copycat, but she does have a tenuous link to Poe and to a secret organization called the Raven Society. These are the puzzle pieces that Alex and company work with, in a tale that develops like the proverbial peeled onion, a layer at a time. Alex, fresh from a breakup, also continues her unconsummated flirtation with Mike. It’s a tribute to Fairstein’s integrity and her clear, measured prose that the novel never tips into prurience. Her methodical presentation of authentic detail engages reader interest more than narrative flourish or cheap thrills. She’s the real deal. Agent, Esther Newberg. (Jan.) Copyright 2004 Reed Business Information.

I love crime fiction and I love Edgar Allen Poe(hauntingly  beautiful prose and poems) and this book had them both. If it had been a physical page turning book I would have read it in one sitting because I was so caught up in the story of a women bricked up in the wall of an old building where Edgar Allen Poe once lived, but since it was an audio format  and I only listen when running errands in the car every day it took about a week.  It was great and I highly recommend it to anyone that enjoys a good murder mystery. 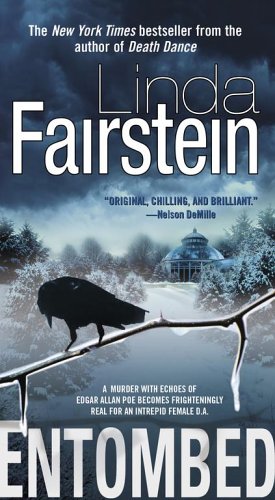