Ever since Tory Brennan and her friends rescued Cooper, a kidnapped wolf pup with a rare strain of canine parvovirus, they’ve turned from regular kids into a crime-solving pack. But now the very place that brought them together – the Loggerhead Island Research Institute – is out of funding and will have to shut down. That is, unless the Virals can figure out a way to save it.

So when Tory learns of an old Charleston legend about a famous she-pirate, Anne Bonney, whose fortune was never found, she can’t believe her luck – buried treasure is exactly what she needs to save the Institute on Loggerhead! Trouble is, she and her friends aren’t the only ones looking for it. And this time, the Virals’ special powers may not be enough to dig them out of trouble . . .

I didn’t enjoy this one as much as the first because it was just WAY too improbable !

The teens being infected with a rare strain of canine parvovirus and having super powers is bad enough but I can live with that-it’s the finding of the buried treasure that had me rolling my eyes.  For hundreds of years experienced treasure hunters had looked and failed the find the treasure of the pirate Anne Bonney, but along comes four teenagers and viola they find it in a matter of days.  GIVE ME A BREAK!

While is was okay to listen to, I don’t know if I’ll  check out other books in the series. 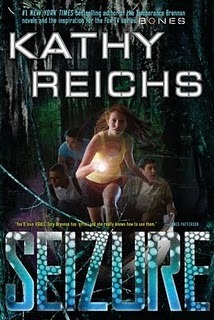