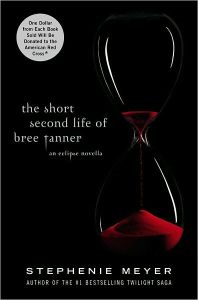 Fans of The Twilight Saga will be enthralled by this riveting story of Bree Tanner, a character first introduced in Eclipse, and the darker side of the newborn vampire world she inhabits. In another irresistible combination of danger, mystery, and romance, Stephenie Meyer tells the devastating story of Bree and the newborn army as they prepare to close in on Bella Swan and the Cullens, following their encounter to its unforgettable conclusion.

I thought Stephenie Meyer did a good job bringing the character of Bree Tanner, the newborn vampire, to life and making her a “real person” for us.  You can’t help but feel bad and very sad for Bree and at the end I want to scream, “STOP, you can’t do this”, but the law is the law  and she is killed by Jane  and  life for everyone else goes on.  Sad.

The legions of readers who are hooked on the romantic struggles of Bella and the vampire Edward will ecstatically devour this third installment of the story begun in Twilight, but it’s unlikely to win over any newcomers. Jake, the werewolf met in New Moon, pursues Bella with renewed vigilance. However, when repercussions from an episode in Twilight place Bella in the mortal danger that series fans have come to expect, Jake and Edward forge an uneasy alliance. The plot patterns have begun to show here, but Meyer’s other strengths remain intact. The supernatural elements accentuate the ordinary human dramas of growing up. Jake and Edward’s competition for Bella feels particularly authentic, especially in their apparent desire to best each other as much as to win Bella. Once again the author presents teenage love as an almost inhuman force: “[He] would have been my soul mate still,” says Bella, “if his claim had not been overshadowed by something stronger, something so strong that it could not exist in a rational world.” According to Meyer, the fourth book should tie up at least the Edward story, if not the whole shebang. Ages 12-up. (Aug.) Copyright 2007 Reed Business Information –This text refers to the Hardcover edition.

Edward’s soft voice came from behind me.

I turned to see him spring lightly up the porch steps, his hair windblown from running. He pulled me into his arms at once, just like he had in the parking lot, and kissed me again. This kiss frightened me. There was too much tension, too strong an edge to the way his lips crushed mine–like he was afraid we had only so much time left to us.

As Seattle is ravaged by a string of mysterious killings and a malicious vampire continues her quest for revenge, Bella once again finds herself surrounded by danger. In the midst of it all, she is forced to choose between her love for Edward and her friendship with Jacob–knowing that her decision has the potential to ignite the ageless struggle between vampire and werewolf. With her graduation quickly approaching, Bella has one more decision to make: life or death. But which is which?

With the movie coming out in less than a week I decided to read this again (for the third time).  I wanted to re-aquaint myself with all the characters and their interactions. I am ready now for the movie and can’t wait to see what they do with the “tent scene”.